d7II to d7x update error corrected, please accept my personal apology for any disruption in usage!

Please accept that I deeply regret any inconveniences you and others have experienced due to the upgrade failures.

A corrupted archive file (containing the final part of the update to the current d7x “FastTrack” release) was replaced on our servers this morning (around 12 hours ago) which resolved the issue in our testing (using the same copies of d7II on the same systems that consistently reproduced the behavior.)

To be clear, the issue resolved today on October 31st, 2017 at around 7AM or 8AM Eastern time zone (3-4AM UTC) is regarding the extraction failure occurring during the update from d7II to d7x, and leaving a d7II.exe file in the directory that may have the version 3.6.87 but that is reduced in size (about 1.2MB instead of the 6.9MB as would be a d7II v3.6.86 or actual newer v3.6.87 executable) and that smaller d7II.exe (an “update stub”) would give the same extraction failures consistently upon any subsequent relaunch.  This issue is now resolved in what is now extensive testing throughout today.  Relaunching the same d7II.exe file (around a 1.2MB file) should now (as of the time specified above) complete the update as expected, and run the newly extracted d7x executable.

During the failure, you may have noticed a few other files that were left in the d7II directory, one of which was d7II.exe.d7II_Exe_0 (or similar.)  Renaming the file to leave the first part of the filename “d7II.exe” (you can also think of as removing the temporary file extension) would leave you the previous v3.6.86 d7II.exe file, ready for full usage, as normal and expected.  Unfortunately, we must now regret that without instructions suddenly appearing in the d7II directory, this would not have been obvious to most users, and we realize a tech that is onsite, or out “in the field” might not have a second flash drive or a copy/backup/any other accessible means to recover and use d7II at that time.

While it didn’t help this time, currently d7x contains several update fail-safe mechanisms not in d7II, as well as new update prompts/information and textual instructions that can be delivered and saved in the d7x exe’s directory in plain text files prior to the update process, should something crazy ever occur again despite the fail-safe routines.  Unfortunately, the d7x capable of newer fail-safe behaviors is the very thing failing to extract from the corrupted download in this case (how embarrassing, but it does demonstrate the need for the new d7x code!)

Also, I feel like it is equally important to take this opportunity and make clear that the new d7x is a “FastTrack” build, and not all functionality may function as expected (although there should be few if any issues beyond “Offline” functionality and the minor issues in current documentation.)  Please always read about any current issues in the d7x manual.  FastTrack builds are like the “Pre-Release” updates in d7II, or think of the “Release Candidates” in similar Windows terminology of the recent past.)  For d7x, the FastTrack builds are intended to give techs a working copy of new d7x code to use and to provide us with feedback on any features or changes.

Once standard in d7II as “Pre-Release” updates, d7II no longer detects the cutting edge update type, which was disabled in the final releases before the d7II code freeze on new features during d7x Platform code development.  As a result, the early release of d7x was only possible via the mainstream d7II update.  Those who were not long-term subscribers of d7II or who may have updated without reading the information on our d7II -> d7x update announcement (linked to via the lower status bar of d7II) may not be aware of the meaning behind the “FastTrack” status reflected in d7x’s top title bar.

Please accept my personal apologies for any troubles incurred as a result of the recent update failure.  Also, please be aware of the d7x related links below, for your benefit now and in the future, and be sure to submit feedback on the product as your time permits, so we can ensure that d7x is the app you want and need it to be, and that we don’t miss anything as we strive to exceed your expectations!

For the most part, look for Self-Hosted FTP and Email/SMTP[...] 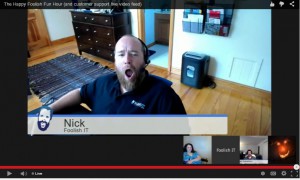